Have the Audacity to be in Integrity 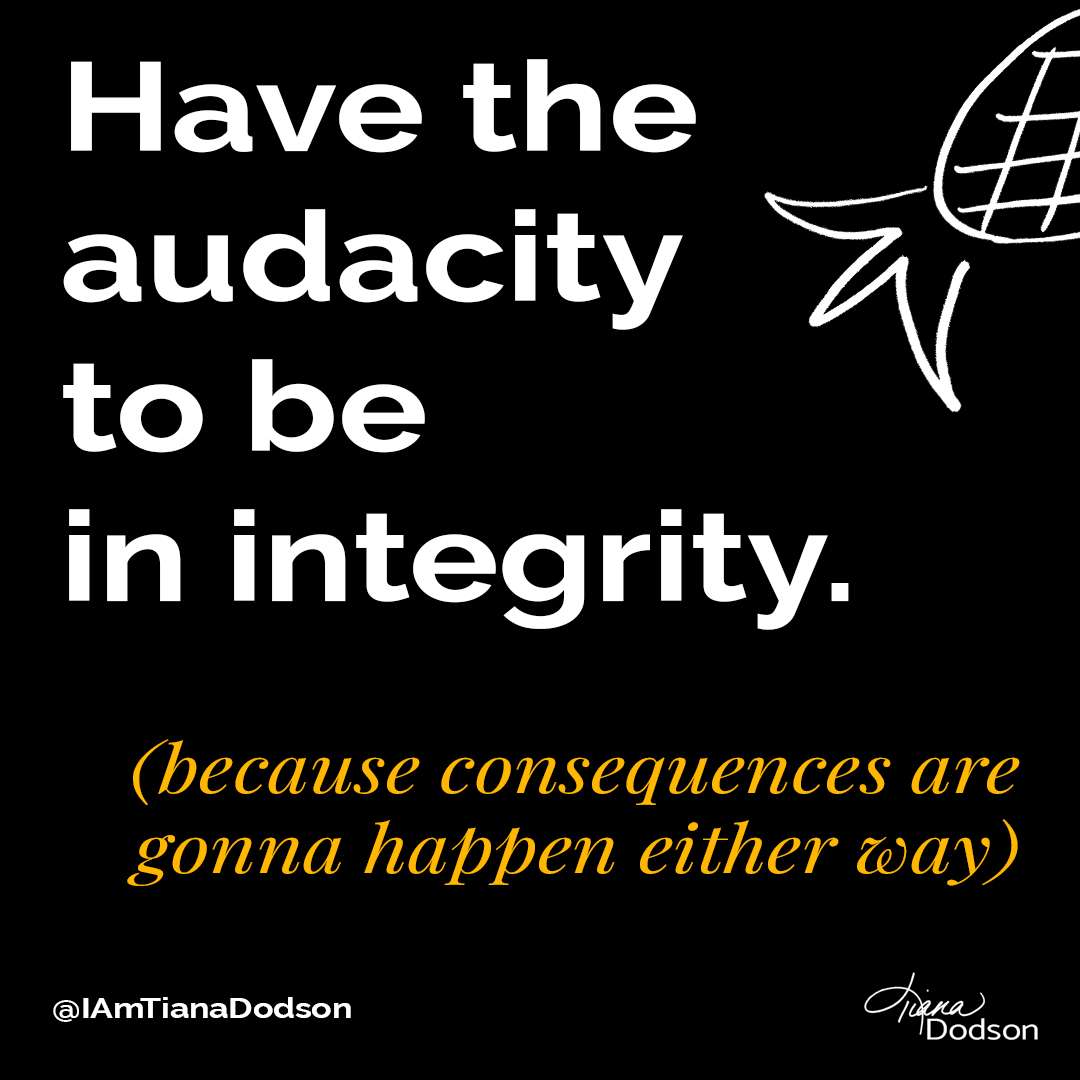 Hey there, it’s Tiana and I have a confession.

It might be a small confession, for some of you who might know me better, and it’s maybe a big confession to people who maybe have only come across me and my work relatively recently.

All of these things are wounds from my childhood, from my upbringing, from my identities.

And these are things that I work really, really hard to just be able to live my life with.

Something that has been a coping mechanism I developed at a very young age and carried on through a lot of my lifetime has been the ability to be really flexible, meaning that I’m really open to other people’s thoughts and feelings and ways of being.

I’ve been pretty well practiced at being what a friend from college told me was “making myself vanilla pudding.”

Listen in for the audio answer to TL:DR

And she was right, you know, because vanilla pudding is the kind of thing that not a lot of people have very strong feelings about. For some people, it’s something they enjoy. But it’s not something they’re really passionate about. It’s not political, it’s not really interesting. It’s nothing that anybody is going to be like, “that’s the thing that’s going to make my day!” It’s something that if it shows up on the buffet and you’ve got space, you might go for it.

So I was making myself vanilla pudding. It was who I was. Like I was saying, “imprint upon me!” Because vanilla is that base flavor in Western cooking. Vanilla is that flavoring that we put in when baking any kind of pastries or sweets, to just give them a flavor so that they’re not just cooked flour. And then we layer flavor on top of vanilla.

And so that’s who I was: I was vanilla pudding.

I was that base: open, flexible, not really rocking the boat or being very interesting in any way, shape, or form where you could come and just imprint upon me. I would very, very easily just go with the flow and do what other people were doing. I’d do that because I needed to belong.

And over the years, this has gotten me into some not so great situations (lots of stories there for sure). But it’s gotten me into places where I’ve done things and acted ways that aren’t really who I am or not really who I wanted to be because I was out of integrity. I wasn’t performing myself for myself, I was performing a mirror image of the people that I thought I wanted to be like.

This has been a practice for me.

Not many people have very strong feelings about vanilla.

Because it takes audacity.

It takes bravery to keep stepping out into the world. To keep showing up in integrity. To keep choosing myself and my path, my wants and desires, as opposed to the ones that will make other people comfortable or maybe make them like me better.

So I’m telling you this little story and using this bad analogy about food because I want you to practice having the audacity to be in integrity.

Because what we’re doing when we’re not in integrity is giving up parts of ourselves. Allowing ourselves to just go with the flow and do things that we don’t want to do and be around people we don’t want to be around and act in certain ways that don’t fit for us is because we’re trying to avoid consequences.

We think that it’s easier to just go along to get along.

We think that that’s easier than going, “no thanks, that’s not for me” and being left out.

But the fact is that consequences are going to happen regardless of which choice you make.

The challenge here, the discernment piece, is to choose which consequences you would rather have: the consequences of the guilt hangover of not being who you were, not doing things that were true to yourself, and maybe betraying your identity, or the consequences of somebody going, “you’re no fun, I don’t want to play with you anymore,” and the possible loss of a friendship.

And in the end consequences are.

You have to choose the one that makes the most sense for you.

But also caveat, nuanced piece here: you have no control over what the consequences are.

You only have control of what you do in response to them.

So I leave you with that today.

I challenge you, gently, to try to practice having the audacity to be in integrity.

Choose your next adventure by clicking a button below.

Listen to the Live Your Best Fat Life Podcast
Get Started on Your Journey with a Group Read
Join the Newsletter List and Stay in the Loop
We use cookies on our website to give you the most relevant experience by remembering your preferences and repeat visits. By clicking “Accept”, you consent to the use of ALL the cookies.Read More
Do not sell my personal information.
Cookie SettingsAcceptReject
Manage consent

This website uses cookies to improve your experience while you navigate through the website. Out of these, the cookies that are categorized as necessary are stored on your browser as they are essential for the working of basic functionalities of the website. We also use third-party cookies that help us analyze and understand how you use this website. These cookies will be stored in your browser only with your consent. You also have the option to opt-out of these cookies. But opting out of some of these cookies may affect your browsing experience.
Necessary Always Enabled
Necessary cookies are absolutely essential for the website to function properly. These cookies ensure basic functionalities and security features of the website, anonymously.
Functional
Functional cookies help to perform certain functionalities like sharing the content of the website on social media platforms, collect feedbacks, and other third-party features.
Performance
Performance cookies are used to understand and analyze the key performance indexes of the website which helps in delivering a better user experience for the visitors.
Analytics
Analytical cookies are used to understand how visitors interact with the website. These cookies help provide information on metrics the number of visitors, bounce rate, traffic source, etc.
Advertisement
Advertisement cookies are used to provide visitors with relevant ads and marketing campaigns. These cookies track visitors across websites and collect information to provide customized ads.
Others
Other uncategorized cookies are those that are being analyzed and have not been classified into a category as yet.
SAVE & ACCEPT